The theme for the Spring Equinox arrived to me quietly, and secretly, before it was officially announced. I knew that I wanted to create a tree, one that had deep roots, as this is symbolic of recovery to me. I have a “One Day at a Time” medallion with a tree on one side. I kind of fall in love with trees, sometimes.

When I was traveling to Napa Valley, California, for work, it was the summer of 2016 and the summer I decided to definitely not drink. I wasn’t on the fence anymore, I had made this decision in my heart, but I didn’t know if it would stick or not, so I was very quiet about it. I quietly declined the winery tour to Silver Oak, I quietly told the hostess at the resort that I didn’t drink when she offered me a complimentary bottle of wine. I quietly said “yes” when a co-worker asked me if this was it for me (when I quietly declined wine at dinner). I had 28 days sober then.

Instead, I discovered Gabby Bernstein, meditation, art, and the tree in my back yard. Yes, this resort was so fancy, I had my very own backyard, and my very own tree.

Now this tree was a baby tree. It was being supported by two poles, and you knew if the poles were taken away it might falter. But it was strong, you could see that, too. Kind of like early recovery. The poles for me were God, and books, and nature, and art. I was a baby tree. 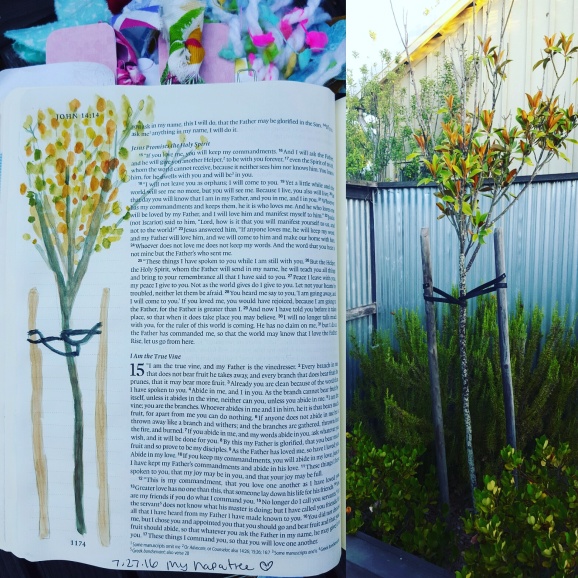 I would sit outside when I had breaks from the meeting, or when the day’s meetings were over with, and I would sit with my tree. I created artwork, I read “Spirit Junkie” by Gabby Bernstein and I felt a deep inner peace. I felt renewed and free, and it is a feeling I will always think of when I think of that trip, to a place known for wine, I will think of the freedom of being sober.

I started with a blank canvas, and a glue gun. I realized right away that just any glue gun wouldn’t do. Some are too thick, others don’t have the span to go as long as I wanted my tree limbs to go. It took 5-6 tries until I found the perfect one. I started making waves, kind of like scribbles, to create the branches.

Then I created the roots, which involved a lot of layers of glue. Roots are deep and wide, and I wanted to capture that.

Then the next step, after the glue had fully dried, and after I removed all the spider webs of extra glue (which was time consuming but therapeutic) was to add a layer of gold. I selected a royal gold. 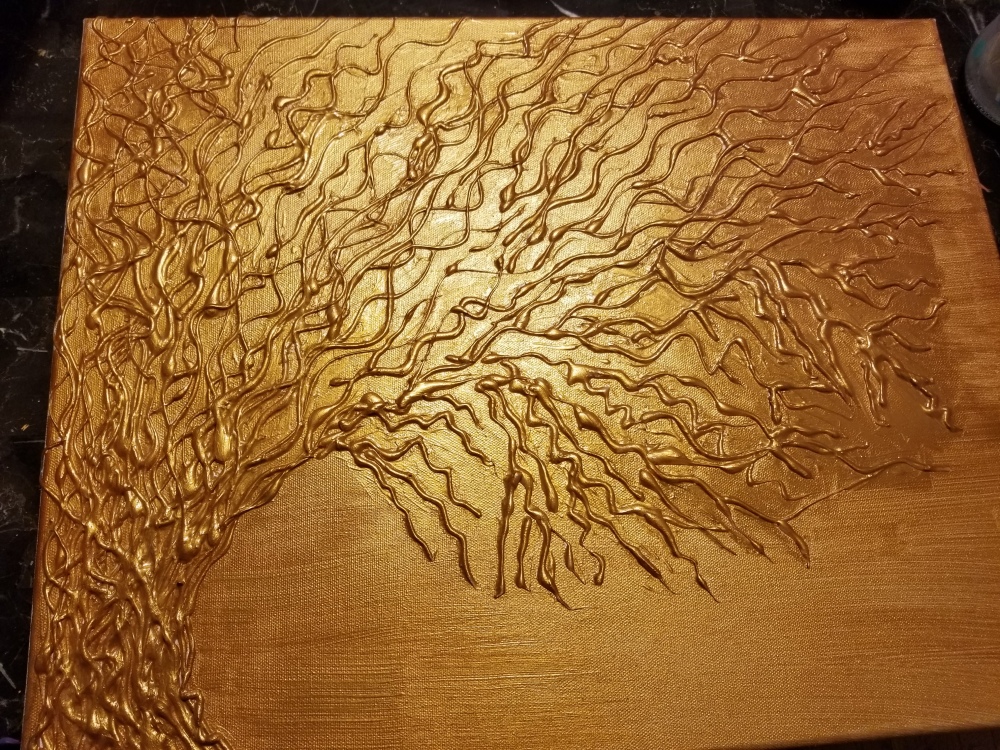 Now I loved it just as it was, gold. But I wanted it to look distressed, like an old tree that had been around the block, no pun intended. 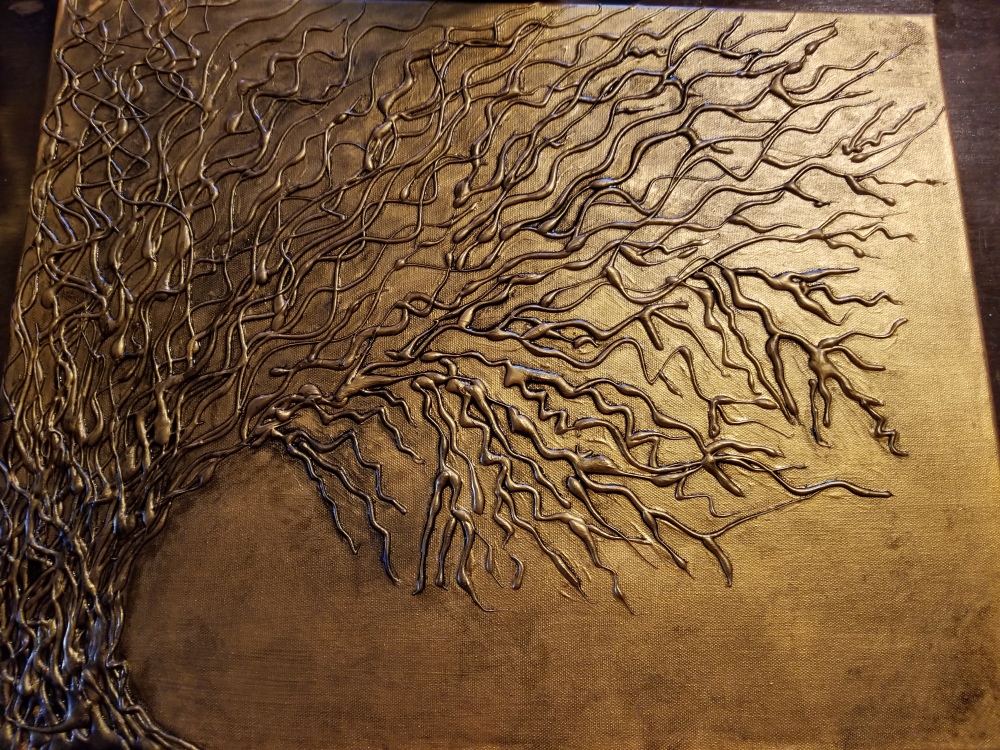 I added black, mixed with water. This was scary for me, I was afraid the black would overpower the gold. But I liked how it wasn’t too much and didn’t overpower the tree.

Next I added a bit of a bluish green, also mixed with water. After every layer, you have to patiently let it fully dry. 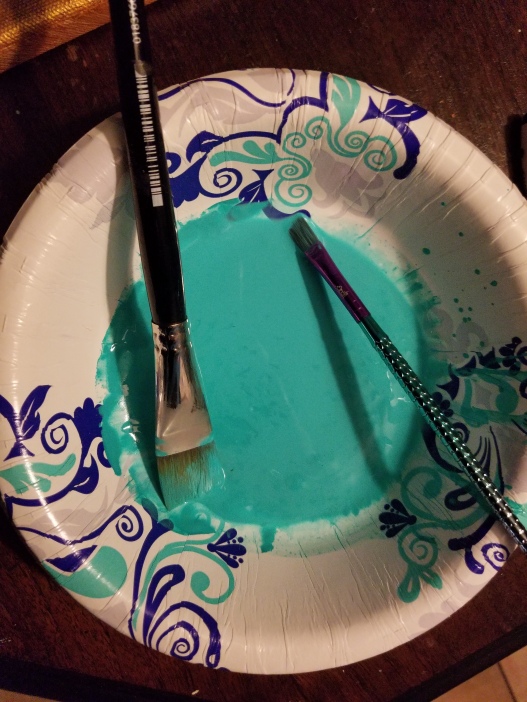 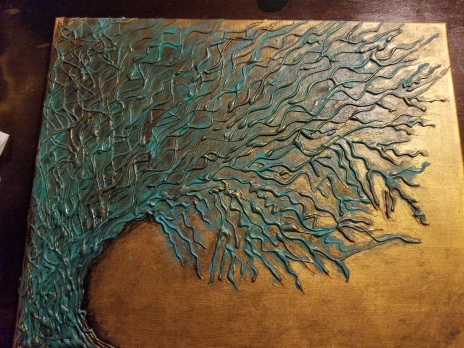 Lastly, I added some white. 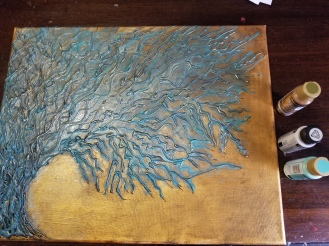 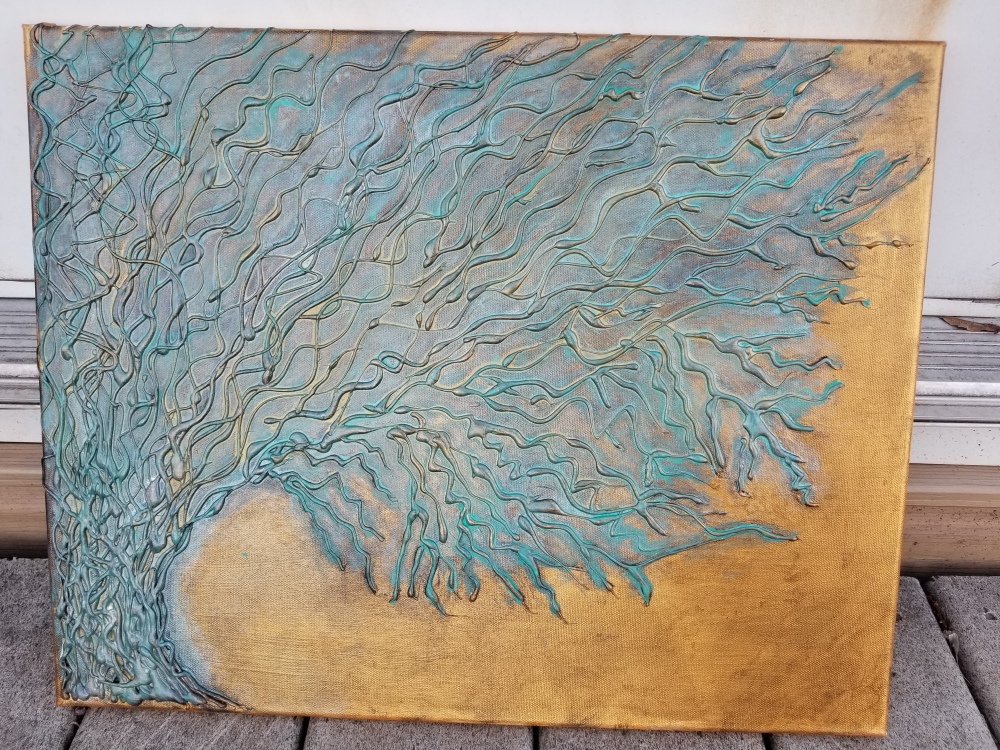 This is the final product. I protected it with a spray fixative, and let it dry.

I also included a poem I wrote about a tree:

If I Were a Tree

I love all of these art exchanges, this was my fourth one, so now I’ve covered all the seasons. I feel like they help me walk this sobriety path. While I started three years ago, I have as of this writing 516 days. Sometimes journeys aren’t in a straight line, but if we have ourselves rooted, we can only grow upward, and stand firm.